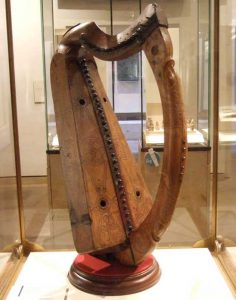 What national symbol, in the land of Ireland, comes to mind when you think about the Republic of Ireland? Shamrocks? Perhaps the Blarney Stone, castles or Irish dancers. It’s surprising to learn the above images are NOT the national symbol. The Irish harp is the official emblem of the island in the cold north Atlantic Ocean! Photo shows the Queen Mary Gaelic Harp.

One of the world’s oldest instruments, the harp has been the national emblem of Ireland for centuries. The Irish refer to it as either the Celtic harp or the Gaelic harp. Irish kings paid harpists to entertain them with song and dance. The harp is allegedly thought of to reflect the immortality of the soul. Furthermore, while visiting Ireland, you will not come across a lot of harps. The harp symbol , however, is seen everywhere including on coins, uniforms, the Presidential seal, and on passports. It is the state seal to the Guinness pint glass.

Another well-known national symbol of Ireland is the Irish flag. The flag is twice as wide as it is tall. In addition, the three colors are of equal size. Known as the Irish tricolor, the flag includes shades of green, white and orange. Green represents the native people of Ireland, most of whom were Roman Catholics. Orange is a symbol of Protestants who are British supporters William of Orange and think of him as a champion of their faith. The color white in the flag denotes the hope for peace between the Catholics and the Protestants.

Ireland is an enchanting land where folklore and legend abound. Irish castles can be haunting, gothic, stately, and yet, romantic. One can explore the rugged countryside and hike along its breathtaking windswept cliffs. This land abounds with history everywhere you turn. One of the most anticipated and much-loved parties is St. Patrick’s Day. Parades, profound costumes, street theatrics and an energetic carnival mood will captivate you.

1 thought on “In the Land of Ireland Symbolisms”