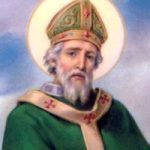 Calpurnuis and Conchessa Succat were Romans. During 375AD in Great Britain, Conchessa gave birth to a son, Maewyn Succat. Although his family was orthodox and his grandfather was a Catholic priest, during his childhood, he was an atheist.

Irish pirates kidnapped Maewyn when he was around 16 years old. They sold him into slavery where he was forced to tend sheep. As a result of his captivity, he became fluent in the Irish language. While a slave, he changed his opinion about the existence God. During a time of extreme hardship and cruelty, he turned to God and became a devout Christian. Through God’s mercy, Maewyn survived years of slavery.

In another dream, God told him of a ship on the coast of Ireland waiting to sail to Britain. In short, Maewyn convinced the captain of the ship to let him aboard. Some believe they landed in France and he and others traveled through uninhabited countryside. Starving, the men questioned him, asking, “If your God is all-knowing, then pray for us! Tell him to give us food!” Maewyn told them nothing was impossible for his God and they should have faith in Him with all their hearts.

After many years, he left France and returned to Britain where he united with his family. While living in England, he trained as a cleric. After becoming a priest, he took the name, “Patricius or Patrick.” However, another dream changed his life forever. In this vision, a letter told him to return to Ireland, where he lived as a slave. Upon his return, he began his true calling as a missionary. He taught Christianity everywhere he went in Ireland. Traveling for 40 years throughout the country preaching the Gospel, he converted thousands of people.

Several legends abound about St. Patrick. One states he used the shamrock to explain the Holy Trinity (Father, Son and Holy Spirit) to convert Irish pagans. Generally, people wore the shamrock as a symbol of the cross. Today it is a national symbol of Ireland.

Another fable claims he drove snakes out of Ireland. According to the world of geological science, Ireland never had snakes as a result of the Ice Age. Besides, the country’s location in the icy waters of the North Atlantic Ocean make it impossible for snakes to survive. The metaphor of driving out snakes, however, represents his banishing paganism and bringing Christianity to the land. If you find a snake in the country today, it is most likely a pet.

In summary, one legend that “is” true; St. Patrick is highly respected worldwide. March 17th commemorates his death. Patrick was never canonized by the Catholic church and is a saint in name only by Irish culture. On March 17, 1766, in New York City, Irish immigrants held the very first official St. Patrick’s Day Parade celebrating the day of his death. Thereby, March 17th continues today to be a secular holiday all over the world.

1 thought on “Who was Maewyn Succat?”